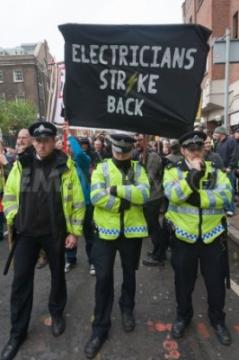 Over the last week, the companies in the BESNA agreement pulled out one by one. Unite are still in negotiations so the long term outlook is unclear, but in the short term the BESNA agreement* has collapsed.
Months of strikes, walkouts and protests by rank and file activists have finally worn down the companies involved, who dropped out after Balfours' second attempt at an injunction against strike action failed. From protests and pickets in London early every Wednesday morning, to mass power station walkouts in the North East, sparks and their supporters and down the country have had a long hard struggle. Like any struggle it’s had its high points, with wildcats, big mobile demos, occupations and link ups with other struggles, and its low points where we’ve ended up on demos of 50 people or less at 6am in the freezing cold, all feeling like we’re fighting a losing battle. There’s many lessons to take from all this, but one lesson in particular to be learned from it all, is definitely keep on keepin’ on.

The importance of this particular struggle cannot be overstated, the proposed 35% pay cutwould have impacted 50,000 electricians in London alone, who’d have faced losing £240 a week, particularly screwing over anyone who had a mortgage or a family. It would also have been a green light for a series of attacks on construction workers and other national agreements.

Rank and file activists will want representation in negotiations and have repeatedly tried to exclude corrupt ex-union officials now working for the bosses, and the union leadership will try to take the struggle out of their hands. We must not also forget that despite the recent victory, the blacklist remains very much active and workplace organisation on temporary construction sites in the South remains at a low in comparison to years past.

In the next few years, the government will probably be using big state projects like crossrail to stimulate the economy, a pattern that’s being repeated in many countries across the world despite the neo-liberal rhetoric of not spending your way out of crisis. Companies taking these contracts will doubtless be taking more opportunities to attack worker’s wages and conditions and their ability to organise. The struggle as they say continues.

* The BESNA agreement: A plan agreed between major companies  to 'modernise' the construction industry. Eeffectively meaning de-skilling workforces and getting rid of training and pay rates previously set up in the JIB national agreement.

This article was published on 28 February 2012 by the SolFed group in North London. Other recent articles: