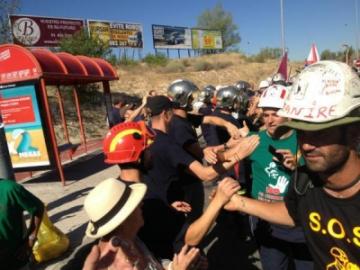 The struggle against pit closures in northern Spain continues with the miners marching nearly 400 kilometres to Madrid. The march from the coalfields is nearly at the edge of the capital, where there will be a mass protest against plans to close down the mining industry.

The "Marcha Negra" started on the 22nd of June from Asturias, Leon and Teruel, all marching towards Madrid. The march from Asturias left from Mieres with eighty miners, with thousands of people there to see them off. The march from Leon, also with eighty miners, set off from Villablino and Bembibre. The two columns from Asturias and Leon met in La Robla with a lot of emotion and then marched together as the Marcha Norte, while the Aragon column from Teruel marched to Madrid from the north east.

During the long journey they planned to take their struggle out of the mining regions and draw attention to the gravity of their situation, and to connect with other working class people along the way. Reading their diaries day by day, the miners express how they were taken by surprise by the response they got. In Asturias when they passed an old peoples home, all the residents had come out to cheer them on. In some places factories had to close temporarily as all the workers went out to greet the miners.  The miners were often met by groups of workers who are also suffering in the economic crisis, such as the workers of the Internapel factory in Zamora, who have gone months without pay.

On Sunday the two columns, now in the province of Madrid, entered the towns of Villalba and Alcala, where they were met by huge cheering crowds. A miner from the Aragon column wrote "We are really emotional with all the support we have received. We didn't expect this so far from the coalfields. Thanks Acala, thanks Madrid, thanks Collado Villalba with the northern column... Thanks to all the good people! TOGETHER WE ARE GOING TO WIN.”

This article was published on 10 July 2012 by the SolFed group in North London. Other recent articles: