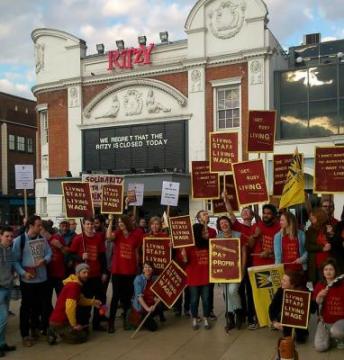 A North London SF member was down at the picket line for the strike at Ritzy Cinema yesterday over the firm's refusal to pay a living wage to staff. Below is their report:

"I got to the Ritzy at about 8pm. I believe there had been a picket line of some form since 9am in the morning. Even though it was at the end of a long day there was still quite a sizeable presence with others probably joining them after work was over, perhaps around 40-50 people.

"For the last hour the samba band Rhythms of Resistance played, the band and a lot of chanting for the living wage drew quite a bit of attention from people passing by (the Ritzy is in a great place if you want to grab
peoples attention). They even marched up and down Brixton High Street a bit. It was a good atmosphere, a lot of energy, quite festival-like with a young crowd.

"The cinema had been closed all day - all showings had been cancelled. I think those on strike seemed quite adamant that most of the staff had come out and were possibly on the picket."

In a statement, the strikers said:

"We have many people we need to thank for making yesterday such a success.

"Thank you to our incredible union members, whose unity and enthusiasm inspired so many yesterday. Unity is Strength! Thank you to the wonderful people of Brixton for the phenomenal support and solidarity they showed all day yesterday and for many weeks before. "Thank you to our sisters and brothers at Bectu, both at head office and all the other brilliant branches who came down to support us.

"Thank you to all the other trade unionists and union branches who are supporting us. Special thanks to the members and branch officers/reps of Lambeth Unison for their genuine and practical solidarity and support during our campaign and strike. "Thank you to all at Brixton Buzz for the excellent coverage and great post-strike party last night. And to Brixton Blog for their fantastic reporting and photos, including this great shot. Many thanks also to London Live for their extensive coverage throughout yesterday.

"Thanks to all our other supporters, we're sure we've forgotten some names but funnily enough we're rather tired at the moment. We love you all!

"This is just the beginning...

This article was published on 12 April 2014 by the SolFed group in North London. Other recent articles: