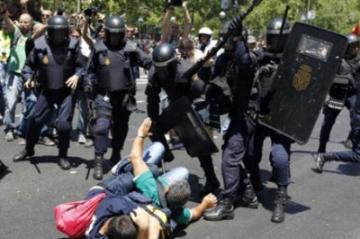 The police have attacked the massive demonstration in Madrid today in support of the miners. They have fired rubber bullets out of vans, shot tear gas, hit people with rifle butts, beaten elderly miners and have injured a small girl with a rubber bullet. On the ground after a police charge you could see discarded walking sticks and miners’ helmets.

Going back a couple of days, despite a blackout in the national media, the excitement was tangible as the “Marea Negra” (Black Tide) march from the coalfields neared Madrid. In the towns near the capital, massive turnouts greeted the miners shouting “long live the struggle of the working class” and “champions, champions”. When the miners marched to Plaza del Sol in the night with their lamps lit, through huge euphoric crowds shouting “you’re not alone”, “struggle is the only way”, and “this is our national team” it was like The Beatles. The support for the Marea Negra across Spain was not only huge but noticeably working class.

The mobilisation in support of the miners (estimated 200,000 on Wednesday night) are in a context of rising unemployment, evictions, layoffs and repression of strikes and popular struggles. On Wednesday in parliament the politicians voted to raise VAT, cut pensions and public sector pay and lower unemployment benefit. There is a rising anger in the population about the bailout and worsening living conditions. The crowds cheering the miners brought banners referring to their own struggles. “We are teachers, but we feel like miners” was one.  “Pensioners with the miners” had a block on the demo today.
The government only plans more of the same: more cuts, more new laws to remove what rights people have left, and the last thing they want is a meeting up of an organised, determined and experienced group of workers with the popular movements of 15-M and anti evictions, and other workers who are becoming more militant, like the teachers. So, in the face of the massive mobilisation suggesting exactly that, they have unleashed tear gas and truncheons on the people. In Madrid we are seeing an extension of the police violence in mining villages in the last few days, in Ciñera and Polo de Lena where the police attacked the whole population for supporting miners, firing tear gas canisters through windows in the middle of the night and kicking down doors when the miners sought refuge in houses.

Demonstrations have been called all over Spain to protest the police violence and in opposition to the new austerity measures. The miners say they will stay in Madrid as long as it takes. This is a tense moment, as the government uses repression to try to intimidate people off the streets as it forces through its austerity measures on an angry and disillusioned population.

This article was published on 12 July 2012 by the SolFed group in North London. Other recent articles: