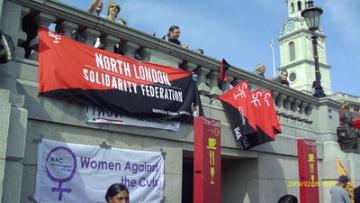 On Sunday 1st May members of both North and South London Solfed celebrated Mayday by joining the anarchist contingent at Clerkenwell Green. Turn out was average, and we did not see the expected sea of red and black flags, yet a healthy crowd still gathered to listen to some rabble rousing speakers on an open mic.

After waiting at Clerkenwell for a few hours and distroing plenty of Catalysts we grouped together and joined the march down to Trafalgar Square, the anarchist bloc marching next to the Latin American Workers Association. We stayed in Trafalgar square a while, relaxing in the sun with a banner and chatting to UK UnCut activists occupying the square but after an hour or so we all swiftly retired to the pub.

On one slightly negative note, as per usual, the May Day march is unfortunately heavily populated by large pictures of Stalin, Mao and other more obscure dictators. Yet we shouldn’t let this rather defunct display put us off, as anarchists we remember May Day for its content, for those anarchists killed after Haymarket and the demand of an eight hour day. A demand that while it may seem paltry today is still one that capitalism globally could never hope to meet. Indeed, here in the UK we still work the longest hours in Europe, and so such a demand should definitely remain with us.

We are now 125 years on from Haymarket and, technologically, humanity has progressed far, yet for all that has changed much stays the same. Capitalism means our spiritual and material poverty will always lag far behind our potential technological abundance. However, just as global capitalism forces most of us to work long hours for someone else’s profit, so our resistance is also global, and with demonstrations around the world, for all its flaws, this years Mayday is once again testament to that.

This article was published on 20 May 2011 by the SolFed group in North London. Other recent articles: