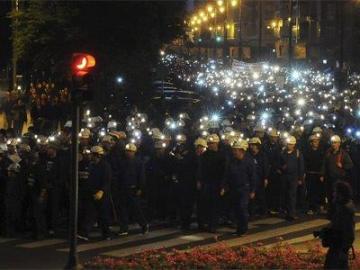 We have translated this letter from a retired Asturias miner, responding to comments about the struggle and talking about his experiences. He explains a lot of the background to the dispute.

I’ve worked for twenty five years in the mines. I first went down the mine when I was 18 and I would like to say that I am amazed by a lot of comments that I’m reading about mining and early retirement. I’m going to give you my perspective.

Firstly the struggle which the miners are carrying out at the moment isn’t to ask for money. It is that they respect the agreement that was signed last year between the Ministry of Industry and the miners’ unions, and which had subsidies designated until 2018.  This money was from the European Community and not from the Spanish government.  It isn’t money that came from any Spanish people to help us as many people who are criticising us so much seem to think.

Regarding this money what I, like almost all mining families ask myself is, where is the part of the money from the Mining Funds that was supposedly going to the creation of alternative industries in the coalfields, after the closure of the mines? Well, like in many other sectors, this money has been handled by the politicians and the unions. With part of this money, for example, Señor Gabino de Lorenzo, the ex-mayor of Olviedo, paid for new streetlights in his city, the new Palace of Expositions and Congresses and many other projects. Señora Felgeroso, the ex-mayor of Gijon, spent it on the Technical University and other projects.

In the Valle de Turon, in the Caudal coalfield, where I live, there have been 600 deaths in the mines (the ones that we know about, as in the civil war they burned the previous archives) from 1889 till 2006 when they closed them. Of course they did build a sports centre, which when they opened it didn’t have any toilets and is practically unused. All around us everywhere there are heaps of rubble, which bit by bit they are trying to clear up. But reindustrialization, which is what will create stable work so that there is still life in the region, almost nothing.

Secondly, I am amazed to see that lots of people object to this subsidy, I didn’t want to write this but there are subsidies to other sectors like livestock farming, agriculture, fishing and many more. Personally I am happy about that, I would rather that the subsidies went to workers than that they went to those thieves who rob us every day.

Thirdly, after the end of the civil war, I think that many of you don’t know that the miners worked an hour a day for free for many years, to repair what Francoism destroyed, when in our houses there was not enough to eat.

Four. In 1962 the miners started a strike which spread all over Spain, in which we won many of the rights that all the Spanish people have up till now and which they are trying to snatch away from us. In this strike there were many beatings, many people imprisoned, and many people who were exiled to other provinces of Spain, separated from their families, and who only returned in 1980.

Five. Regarding early retirement, it is a myth that miners can retire at forty and you talk about quantities of euros as if we had won the lottery. The reality is different, in the payments which people who have retired early receive, a part is made up of their extra payments. We make social security payments of 50%, so every two years we work, we pay an extra year of social security, for example I have worked in the mines for 25 years and I have paid 37 and a half years of social security payments, how many of you think you have made the same level of payments?

Six. You say that the coal they bring from abroad is cheaper than Spanish coal, I’m not convinced but taking it as true, do you want to see us working like slaves like in other countries? I don’t want any worker anywhere in the world to be a slave.

I’m going to write this because it really happened. I’ve worked alongside workmates from Czech Republic and Poland, when they came to Asturias and started to buy things in the shops, they were amazed because they could buy the amount they wanted and in their own country they couldn’t do that. The first Christmas they spent with us they bought a bar of turron (traditional Christmas sweet) in each hand. We asked them why they did that and they said in their country they couldn’t afford it and their wages only gave them enough to eat, and that badly. What I want to say is that if we don’t defend our rights we will suffer the same.

Seven. Regarding the roadblocks on the motorways I will say to everyone who is complaining because the miners have made it difficult to get to work or study and who say that when they have problems in their company, they will go to the workplaces of others to “annoy them”. I will say to them that whenever other comrades from other industries came to ask for help do defend their jobs, we stopped work for 24 hours, giving support here and abroad.

In the time of the strikes of the English miners, we stopped work and we made a collection to send to them so they could feed their families. Does anybody doubt that we would unite with any affected workers? But it seems that now it’s too much effort even to ask others for help. Supporting one another is fundamental, but what we do is the opposite and so those at the top always play with an advantage.

If all the Spanish workers were as united as the miners, the rulers of this country would think long and hard before making the cuts they are making now, I can assure you. Think about who is really stopping you going to work or going to class, with firing people so easy now and the cuts in education. The people who are stopping you are the politicians.

I would also like to say to the people who say that we should go to Madrid to the doors of the Ministry and “leave everybody else in peace”, yes, we have gone there, but the censorship in the media means maybe they are not giving you all the facts.

I strongly believe that a worker who defends their rights is not a terrorist like now they are calling us for fighting to defend the wellbeing of our families.

I invite you all to leave your houses and defend what is yours. Staying at home, you are letting them bit by bit bring hunger into your lives.

They want our children and yours to be illiterate like us, that we see the walls of the schools more from the outside than the inside, because an illiterate people is more easy to rule.

Keep yourselves informed. Question everything you see on the television, now you have internet, mobiles, you can be in permanent contact, organise, in the way that you want, pacifically or directly on the barricades, but organise! Make objectives to achieve quickly as the government moves very quickly when things are in their favour and they know it.

Take the word “fear” and the phrase “for what, it’s not going to change anything” out of your minds and take control of your future.

If there is anything you don’t understand in what I’ve written or you want to ask me a question about something specific, if I can, I will answer with pleasure.

Many thanks to those who have supported us from other provinces and from other countries.

This article was published on 21 June 2012 by the SolFed group in North London. Other recent articles: