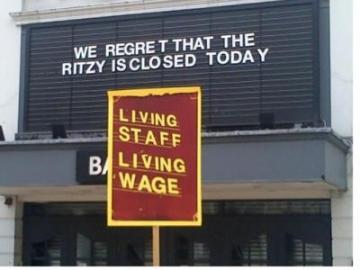 The North London Solidarity Federation would once again like to send out our solidarity to the London cinema workers who have have been fighting an inspiring campaign against low wages and zero hour contracts.

In a city dominated by low-wage service jobs, London's cinema workers have shown that we can fight back and win.  In their struggle to secure a living wage, they've gone on strike, spread struggle from cinema to cinema, formed unions, devised media-savvy campaigns and enlisted the help of supportive celebrities.

Cinema is one of the many 'desirable' industries where bosses penalize workers with low wages because they happen to have a job that matches their passion.  Well, no more.  Cinema workers are fighting to make sure that cinema work pays.  And, for that, they have North London SolFed's solidarity and support.

As part of this continuing fight, London's cinema workers will be holding a rally and march on July 17th.  North London SF encourages all our friends, contacts, and comrades to attend.

If you're not in London, you could consider leafletting your local cinema on the day. Contact the campaigns to see how you can get involved!

Front of house staff across BFI, Odeon, Cineworld, Curzon and Everyman are joining the Ritzy cinema workers on a Cinema Workers Rally through the West End ending with speeches outside the GLA.

The rally will be calling for the Living Wage as a minimum for all cinema staff and a boycott of Picturehouse cinemas.

The rally will meet at 1pm outside the BFI South Bank to march through the West End.

Donate to the Fighting Fund: www.ritzylivingwage.org/donate

This article was published on 28 June 2014 by the SolFed group in North London. Other recent articles: