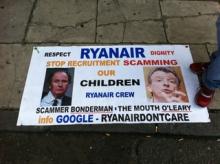 Liverpool Solidarity Federation recently agreed to fully support the Ryanair Don't Care campaign, which was formed to highlight and fight against Ryanair's exploitative employment practises. Campaign founder John Foley has been arrested six times for his direct action activism against the airline. Blogs exposing Ryanair's mistreatment of employees have been closed down by sevice providers. Numerous Ryanair employees and ex-workers have also been in touch to share their negative experiences of working for the airline.