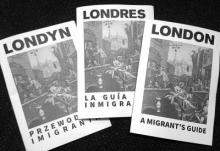 Since the beginning of the crisis more and more migrants are arriving in London and the UK. When people come here, they often find their first steps difficult. We want everyone to feel welcome and help them as much as possible. That’s why we have published  a new pamphlet, “London – a migrant's guide”. It is a practical introduction to life in London and the UK.

The following areas are covered in the guide: