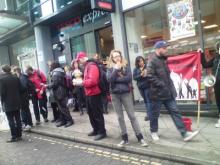 Mark Barnsley is an activist, fitted up prisoner and victim of the state. He has refused to bow to the prison regime. As a result, he has had his radio smashed, been confined to his cell, and recently had the 4th in a series of punishment transfers this year. Contact the Justice for Mark Barnsley Campaign for details on how you can help with actions and solidarity.
Justice for Mark Barnsley - c/o 145-9 Cardigan Road, Leeds LS6 1LJ.
Mark's case on the web: www.openlyclassist.org.uk/
Write to Mark; Mark Barnsley - WA2897, HMP Parkhurst, Newport, Isle of Wight PO30 5NX

The 22nd of April marked the end of the first month of an indefinite strike in Barcelona by workers at the Sant Sadorni d`Anoia logistics centre for the major Spanish Supermarket chain Mercadona.

The dispute began with the sacking of 3 members of the anarcho-syndicalist union CNT and the culmination of a campaign of threats by the company against workers unionising. Even before a strike was declared the company brought in scab workers, attempting to preempt the actions of their own employees. Immediately, the workforce went on strike, initially for 10 days, and has since developed into an indefinite strike.

The demands of the strikers are: