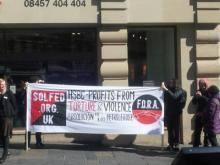 The absence of an Argentine consulate proved no barrier to Tyneside workers joining with IWA-AIT comrades in demanding the freedom of all Las Heras workers and the end of state-sponsored attacks on those fighting for their rights.

On February 3rd the workers at the San Andres dough maker, Disco de Oro, occupied their workplace. The bosses had brought the factory to bankruptcy by using it to back up various financial and commercial machinations. In addition to these debts and the factory’s utility debts, workers had gone without pay as well as social and medical insurance contributions for five months. To prevent the owners selling off machinery, the workers decided to occupy the plant to save it.

Disco de Oro has restarted production and now operates on an anti-authoritarian basis, without bureaucrats and bosses, as a workers’ cooperative. All decisions are taken in a general assembly of workers.