Nothing demonstrates the both the inequity rife in Blair's Britain and the true blight of “asylum” seekers than the death of a 47-year-old man in a basement rubbish room of the Café Royal in London. For two years, while the rich dined in opulent splendour upstairs the man lived in the bowels of the hotel behind the rubbish bins.

When his naked and badly bruised body was discovered, police first though he had been murdered, before it was established that he lived naked due to the heat generated by the basement boilers and a post-mortem found that his injuries were consistent with a fall. The man had been an immigrant worker employed by an agency – one of thousands without papers who are forced to work for a pittance in hotels across London.

No-one accuses non-unionised workers of driving down wages by taking low-paid jobs. So why are migrant workers who do accused of undermining pay and conditions? Migrants just want to earn a living and, like everyone, would love to have better pay and conditions. Many of them would like to organise to improve pay and conditions for all.

Immigration controls prevent people working legally and make them vulnerable to super-exploitation. The direct effect is to undermine the pay and conditions of migrants, and then all workers. To improve pay and conditions in sectors where there are many migrant workers, offer them solidarity. Organise with them and oppose immigration controls which hinder resistance.

At the London School of Economics the cleaning contract is held by ISS, a multinational with lots of privatised cleaning contracts, including the London Underground. The cleaners are mainly Latin American with poor English and a fear of joining a union or speaking out about their lousy pay and conditions.

As a result of a campaign by Justice for Cleaners, the LSE has adopted the London Living Wage which is higher than the National Minimum Wage. However, it was phased in over three years of the new cleaning contract.

Worse, the workers are paying for it. They are currently paid £6 per hour but staffing has been cut and they have to work harder. This has affected standards of cleaning - management blame the new contract for mice in the Library. 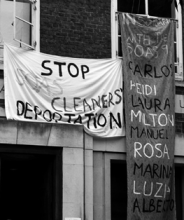 On June 12th, cleaners working for ISS at the School of Oriental & African Studies (SOAS) in London were called to a meeting by management. The cleaners were “processed” by immigration officials who detained nine of them as “illegal immigrants”. It was perhaps no coincidence that a picket of SOAS’ governing body demanding the reinstatement of victimised SOAS UNISON Branch Chair José Stalin Bermudez, who had been prominent in organising cleaners, had been called for that morning.

Those detained were denied union representation, but a campaign was quickly organised by SOAS campus unions and students, migrant worker activists and anti-deportation campaigners. SOAS management was held responsible for ISS “ambushing” their cleaners as punishment for winning union recognition and the London Living Wage.

Workers in contract cleaning face low wages, a lack of basic employment rights, bullying management and victimisation for union activities. However, especially among Latin Americans, self-organisation has sustained struggles against their unscrupulous multi-national employers, and the fight against the immigration controls which are used to sack unwanted workers and victimise union activists.