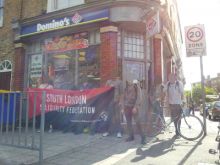 On 15th September SLSF took part in the international day of action in support of Domino’s delivery drivers in Australia.

The drivers have had their pay cut 19% overnight. As their trade union was complicit in the cut, the drivers have formed a new union, the General Transport Workers Association (GTWA), to fight the pay cut.

The GTWA is affiliated with the Anarcho-Syndicalist Federation (ASF), an Australian 'friend' of the Solidarity Federation's international, the International Workers' Association (IWA).

SLSF went to the Domino’s in New Cross and handed a demand letter to the manager, telling him why we were there and how we would be back.