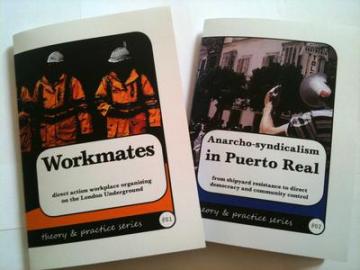 This series is published to both document interesting accounts from workers in struggle, as well as attempts to draw the theoretical lessons from them. Both original and republished texts are included. Most, but not all, are from the anarcho-syndicalist tradition. All are selected for their relevance for workers looking to organise today. The first two titles cover the Workmates collective on the London Underground, and an expanded reprint of the (now out of print) 1995 SolFed pamphlet on the shipyard struggles in Puerto Real.

In the late 1990s, plans to outsource track maintenance on the London Underground were being pushed through by the government. Workers at one depot responded by forming a new workplace group, both inside and outside the existing union, the RMT. This pamphlet charts the highs and lows of the Workmates collective, highlighting their successes and failures, their radically democratic organising method and their creative forms of direct action. We hope it can provide an inspiration to other workers frustrated with the limits of the existing workplace organisations.

The 1987 struggle against threatened closure in and around the shipyards of Puerto Real, Spain, in both workplace and community witnessed the anarcho-syndicalist union CNT playing both a prominent and decisive role. The CNT’s involvement meant that the methods of organising and the forms of action taken departed from those common to reformist unions - with dramatic consequences. Mass assemblies both in the yards and surrounding localities involved workers, their families, neighbours and all supporters. This is an expanded reprint (nearly twice the length) of the 1995 SolFed pamphlet of the same name.