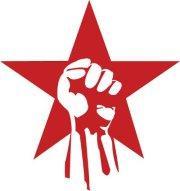 Where: Entrance to St. Pancras Station
When: Monday 19th November, 12:00 – 2:00
Contact: pret.staff.union (at) gmail.com or northlondonsf (at) solfed.org.uk

Since being formed earlier this year, activists from the independent Pret a Manger Staff Union have been facing harassment and victimisation.  In an all too familiar scenario, two founding members have had to fight a series of trumped-up disciplinary charges.

Join the North London Solidarity Federation in standing up to union-busting and bullying by helping us picket the Pret store where the was union formed.  We're there to demand full reinstatement for Andrej and that the charges against Rodrigo be dropped.

Solidarity from other restaurant workers, trade unionists, students, and activists is going to be key to fighting fast food exploitation.  We need a loud and rowdy picket to send a strong message to Pret, so bring banners, chants, co-workers and friends. And spread the word.

See attached for flier.  Also, please see attached for a map highlighting the assembly point as King's Cross/St. Pancras can be a bit of a confusing station.

This article was published on 12 November 2012 by the SolFed group in North London. Other recent articles: