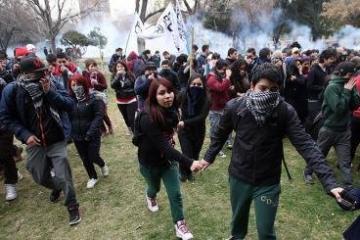 This autumn, or spring in the southern hemisphere, Chile has been witnessing a series of student-led protests which have seen tens of thousands of people take to the streets. The movement has also included student occupations, and linked up with striking workers. The movement began by demanding free education up to university level, as much of Chile’s education sector is privately run for profit, excluding many.  But it has grown to include striking miners and environmental protests, fuelled by the economic crisis and united in anger against the right-wing government.

For the students’ part, Chile has amongst the lowest public funding for education in the world, some of the longest degrees, and no system of public grants or loans. Many students have been fuelled by a sense of betrayal by party politics. Former left-wing president Michelle Bachelet had promised to address their concerns following the ‘Penguin Revolution’ - a series of student-led protests in 2006. But the promised changes have yet to materialise. One Chilean official, Victor Lobos, has attempted to blame the movement on the number of children born outside of wedlock, which he claims drives people to “anarchism”.
Amongst the workers who have joined the movement are the 2,300 miners and 7,000 contractors at the Escondida copper mine, the largest in the world. They have been striking for better bonuses and conditions. Another major Chilean copper mine, Collahuasi, has also seen work stoppages in protest against anti-union measures. Collahuasi workers had previously held a 33-day strike in December 2010. The state-run Coldeco mines have also seen their first walk-outs in over 20 years, prompting the increasingly unpopular President Pinera to meet with union leaders and assure them that Coldeco will not be privatised. Previous strikes at Coldeco saw sub-contractors demanding improved conditions. Signs outside the Escondida mine are calling for the mining industry to be re-nationalised.