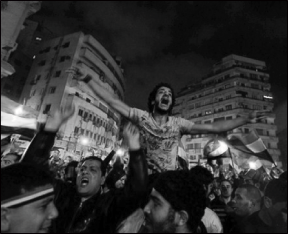 In Egypt, the army has dissolved parliament and set a time frame of six months to hand over to a civilian administration. Meanwhile, they have effectively banned strike action, and reports are emerging of the detention and torture of demonstrators by the same people now handed the reigns of power. Tahrir Square has remained a focal point for demonstrators, while sporadic strike action has continued in defiance of the country’s new military rulers.

It remains to be seen what the final outcome will be in either case. But the talk among elites continues to be of “reform” and “transition,” in the name of “stability” and a return to normality. In other words, throw the people a bone, but leave the existing power structures in place. No doubt, where they cannot be put down entirely, the same argument will be made regarding unrest elsewhere.

In Algeria, the foreign minister promised to end 19-year-old emergency laws “within days,” hoping to quell the discontent there as people call for more protests. In Jordan, restrictions on public assembly are to be eased. Both countries are eager to placate their populations in order to avoid the scenes which overtook their neighbours.

On the other hand, both Bahrain and Yemen are going with the stick over the carrot. After a death during Bahraini protests, riot police further stoked tensions by opening fire upon the funeral of the man killed. This escalated in March with an intervention by Saudi troops at the  Bahraini government’s request. In Yemen, the state is deploying the tactic we saw in Egypt of plainclothes agents masquerading as “pro-government supporters.” Supported by police wielding tasers and batons, they have turned demonstrations into a violent battleground.

Kuwait, not yet caught up in the tidal wave, has announced the distribution of $4bn and free food for 14 months to all citizens. Between the concessions and the confrontations, it is clear that the rulers of the Arab world are finally starting to fear their subjects, as anger at unemployment and austerity merges with demands for political freedom.

The elites in the affected countries, as well as their foreign backers, will certainly wish to preserve the status quo - whether entirely unaltered or with a new face at the top and some appeasement. The people, yearning for freedom, are building their own vision for society as their movements grow - and self-organisation and mutual aid certainly appear integral to what they are forging for themselves through rebellion.

We don’t yet know what will win out, and the result could be radically different in each place. But, as the struggles continue, our solidarity has to go to the working class of those nations now in upheaval. Not just against the dictators, but against the capitalist system that supports them.