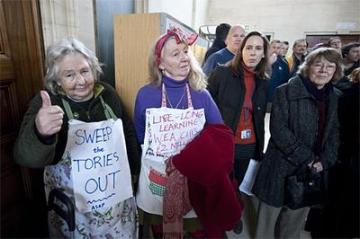 The anti-cuts movement should avoid the temptation of blaming public spending cuts on greedy bankers or Tory politicians. Given that bankers, and Tories, tend to be a pretty obnoxious lot it is perhaps understandable that they are used as hate figures by the left. However they are a symptom rather than the cause of the crisis.

The starting point in understanding the cuts are the changes in the ownership of wealth that have occurred over the last 30 years. The last three decades, under both Tory and Labour governments have seen the richest 10% of the population grab an increasing share of the wealth. Profits have steadily risen while the share of national output taken by wages has steadily declined, shrinking from around 60% in 1980 to 53% in 2007. Between 2000 and 2007, productivity increased at almost twice the rate of real wages. In other words, Britain worked harder, for less – and this was during the ‘good days’ of the economic boom.

The ability of the rich to grab the lion’s share of the profits has resulted in the real terms pay of many workers either stagnating or declining. This is reflected in the fact the population working on low pay has almost doubled from 12% in 1977 to over 22% today. The massive transference of society’s wealth to the rich has had two effects.  As profits increased, the private wealth of a small minority exploded leaving the rich with ever larger amounts of money that needed investing, a process repeated around the world. As the wealth of the world’s richest grew they began to invest in ever-larger amounts, creating a tidal wave of hot money that circulated the globe in search of quicker and higher returns.

At the same time stagnating and falling wages in Britain meant that people increasingly turned to debt in order to get by. The banks acted as the brokers between the hot money and those seeking loans.  Banks profits soared on the back of debt encouraging them to go on a lending frenzy handing out ever larger loans that could not be repaid. The rest is history; defaults on repayments began to grow and financial panic set in.

But even here we still have not reached the true cause of the financial crisis. For the crucial question is what has changed in Britain in the last 30 years that has allowed the rich to increase their share of the wealth? The answer is that there has been a dramatic shift in power in the battle between capitalism and organised labour.

From the second world war right up to the 1970’s there existed in Britain a powerful workplace-based trade union movement which was able to demand ever higher wages and increased spending on welfare and services. This process came to an abrupt end when Thatcherism defeated workplace militancy. This meant a shift in the balance of class forces in favour of the rich, who used their growing power to drive down wages and cut services.

The root cause of the financial crisis then is the defeat of organised workers. As profits grew at the expense of wages borrowing increased to make up the shortfall. Debt was used to pay the bills in the home and fund services and welfare provision. The rich having increased their share of the wealth then in effect lent the money back to us with the banks exploiting their position as intermediaries to increase profits. Bank lending then got out of hand leading to the current financial crisis. To fight the cuts therefore we need to organise and create a ‘crisis’ that will frighten the life out of capitalism.

All across the country there are rumblings of discontent. Town halls where cuts votes have been taking place have been stormed or occupied in Lewisham, Lambeth, Southampton, Haringey, Camden and Barnet. Hundreds have taken part in UK Uncut actions, shutting down the high street names engaged in the most blatant tax avoidance. New Cross library in South London, threatened with closure, was also occupied, while people in Stony Stratford, Buckinghamshire withdrew every single book in protest at plans to close it. This follows on from the student riots in November and December last year, which saw thousands take to the streets to demonstrate their anger at cuts to education funding and a tripling of university tuition fees.

For the most part these actions have been more than just symbolic, and have disrupted business as usual – whether that’s the normal day’s trading of a high street store or the passing of austerity measures in a council session. Disruption – and in particular economic damage – is something the government can’t ignore. It’s also something well within the power of ordinary people to do, as the aforementioned actions across Britain show. If we don’t like what the government is doing to the country, we must make the country ungovernable! Only by making austerity measures the more expensive option can we prevent their implementation.

Such a strategy will be opposed by the official representatives of the movement. For them, the goal is simply to ‘have our say’. Union leaders mostly hope to channel discontent with the Tories and their Lib Dem accomplices into an electoral swing to Labour in 4 years time – talking the talk but avoiding sustained industrial action in favour of symbolic marches and petitions.They conveniently forget the last 13 years of Labour government, and that many of the austerity measures today are simply an acceleration of Labour policies.

Labour politicians were first in line to milk the expenses system, tax pensions, send young working-class men and women to fight needless wars, enact increasingly authoritarian laws, privatise public services through the back door, as well as introduce university tuition fees despite promising not to, and the list goes on. As chancellor, Alistair Darling promised to implement cuts that would be “deeper and tougher” than during the Thatcher era if Labour won the last general election.

Make no mistake – the interests of union bureaucrats and labour politicians on the one hand, and the working class facing austerity on the other are diametrically opposed. The former want to harness popular anger to propel them back into power. To this end, they insist on “orderly mobilisation”, a movement managed from above by bureaucrats and careerists. Their role will always be to stage-manage popular discontent, release some pressure, and ensure it is never a significant danger to the ruling class.

Against this, thousands of ordinary workers and students have been showing the way, creating merry disorder and disruption. Such discontent could well go nowhere. But it could also build into an unstoppable force. Whilst bureaucrats sneer at those who refuse to be a prop for their posturing, the rest of us should be supporting them. The only reason that direct action has yet to win anything significant is because it’s still not the majority carrying it out. But mass direct action can bring any government to its knees.

The TUC’s response to the government’s vicious cuts agenda has been milder than a diluted chicken korma, solely concentrating on an “orderly mobilisation” for the March 26 demonstration. Any other sort of movement by angry workers has been ignored or actively discouraged. Meanwhile, TUC-affiliated unions such as Unite and Unison have abandoned or even worked against militant workers in struggles such as at the Visteon car factory in North London, the Vestas wind turbine factory in the  Isle of Wight and the Latin American cleaners in Central London.

Clearly, those looking to actually defeat the cuts will have to go it  alone, without the support of Barber and his £150,000/year salary! Barber and the TUC have pitted themselves against all those aiming to  materially improve their lives, organising a call centre at Congress House (TUC HQ) in order to collaborate with police to detain  ‘troublemakers’ on the March 26 demonstration, the very same police who violently suppressed student demonstrations over tuition fees late last year leaving scores injured and 20 year-old Alfie Meadows requiring brain surgery after an unprovoked truncheon attack.

But the bureaucrats and careereists aren’t having it all their own way. National Union of Students leader Aaron Porter had to be rescued by police in Manchester, while his stand-in and a Labour MP were egged off the stage. In Glasgow he wasn’t so lucky and was ‘kettled’ by angry students, while TUC head honcho Brendan Barber was also literally left with egg on his face following an uninspiring, half-empty TUC Rally on campus at  Goldsmiths College,  South East London.

A construction worker is calling for Unite union officers who colluded in the blacklisting of trade unionists to be named and shamed. Five union officers have been identified by the Unite, but only one is being investigated. Colin Trousedale, who was a victim of blacklisting in the building industry, said: “It appears to me that these officers will go unpunished if it is left up to the hierarchy of the union both past and present! We must continue with our endeavours to unmask these wretches and make them face the wrath of their victims if nothing else. I have seen three comrades go to the grave without the chance of clearing their name or at least having the knowledge of who in our union betrayed them, I will not go to mine without justice for them and myself.” 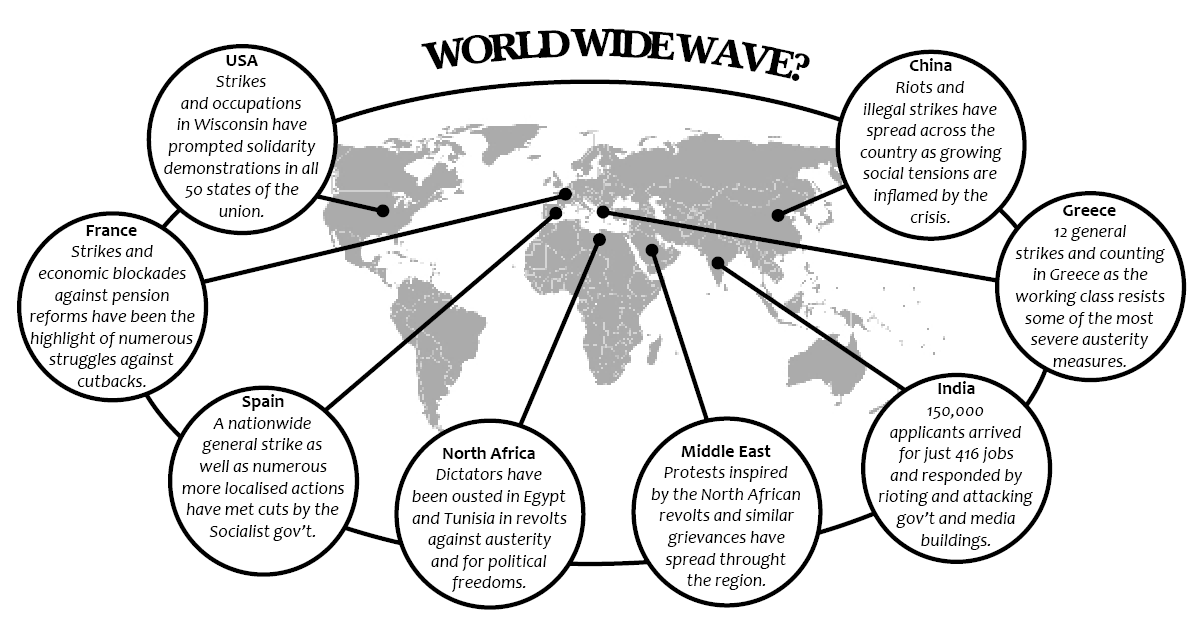