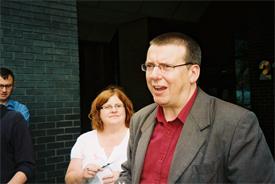 Pell and Bales is a London call centre that raises funds on behalf of major charities. Since a venture capital company, ICENI, bought shares in P&B, the volume of calls staff must make has increased.

This added pressure led to friction between management and staff, and an increase in petty disciplinary actions and grievances.

Pat Carmody, a caller and CWU rep at Pell & Bales, helped build a fast-growing union that won a pay increase for the first time in 6 years and is capable of winning disciplinaries and grievances. Senior management were none too pleased.

In June, Carmody was suspended for writing an article for Socialist Worker in defence of a suspended colleague. Management claimed the article defamed the company and suspended him.

In June 2008 a solidarity picket outside of Pell & Bales’ office was called, attended by supporters, including workers from Shelter, the Solidarity Federation and the London Coalition Against Poverty.

He was sacked on the 21st June, but won his appeal and was reinstated with back pay on the 22nd July. However, he did receive a final written warning and management intend to rewrite the text of the staff handbook to reinforce their control of press relations.

If we are to defend our rights to freedom of speech and stop the victimisation of active union members, then we must repeat such acts of solidarity.