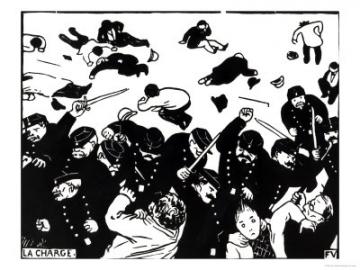 “Laws and government may be considered in this and indeed in every case as a combination of the rich to oppress the poor, and preserve to themselves the inequality of the goods which would otherwise be soon destroyed by the attacks of the poor, who if not hindered by the government would soon reduce the others to an equality with themselves by open violence.” (source)

The father of liberalism, John Locke, was equally candid: private property was prior to government, and government existed to protect private property. Consequently, property is freedom, and only proprietors should have political representation in the state. For liberalism legitimate political violence is that of the state, exercised to defend the privilege of the propertied minority (Locke’s ‘right to revolt’ only applied should a government fail to do this). Despite the bitter struggles to extend the franchise beyond the male propertied elite, it still does this remarkably well. The Liberal Democrats’ pre-meditated abandonment of their pledge on tuition fees is only the latest example. Much like Aaron Porter, subsequent self-serving backtracking notwithstanding, they stand at odds with those they purport to represent.

This has led many to say they’re not doing their job. Our representatives are meant to represent us, and they’re not doing an adequate job. This completely misunderstands the nature of representative politics. The string of ‘bad apples’ that have headed the NUS; warmonger Jack Straw, racist liar Phil Woolas, despicable Aaron Porter; the undeniable Machiavellianism of politicians who say whatever it takes to get elected then go back on their word once in office… These are not exceptions but the rule. Representation produces so many bad apples because it is rotten to the roots. It was designed to empower the propertied class and it does so like clockwork. The problem is not that ‘our representatives’ aren’t doing their job but that they exist.

Once elevated to positions of power, with the salaries, prestige and privileges to match, representatives no longer share our interests. Careerist NUS bureaucrats and lying politicians are a symptom not a cause, the problem is the inherent divergence of interests between representatives and the represented, which forever frustrates attempts to replace ‘bad’ representatives with ‘good’ ones, who go bad in turn. Representation means elected officials are empowered to speak for and take decisions on behalf of those who elected them, as opposed to simply carrying out the will of the electors (as with mandated delegates). Guy Debord had the Leninist dictatorships in mind when he wrote that “the representation of the working class radically opposes itself to the working class” (source), but the point generalises to representation itself. So if the system’s rotten, how does it survive?

Clearly, it does not do so by brute force alone. Unlike the various flavours of tyrannical regime, liberal democracy requires a large degree of consent, without which the rule of the propertied can only be enforced by brute force – too much of which reduces liberal democracy to straightforward tyranny. This consent is not a natural phenomenon, but is constantly being manufactured. The role of the free press here is central – as the headlines following the Millbank riot would suggest.

Noam Chomsky’s famous ‘propaganda model’ explains how this works, without the direct political censorship of dictatorial regimes nor resort to conspiracy. Rather the media consist of businesses that aim to make a profit by selling a product to a customer. However the product is not neutral information sold to readers - the media make most of their money by selling their audience's attention to advertisers, which in turn means that information is subjected to different pressures and filters. The information reported is shaped by business interests and corporate hierarchies : at the top sit corporate and state interests, and like in any hierarchy, promotion is achieved by pleasing your superiors. Writing cutting exposes of said corporate and state interests is a sure-fire way to abort a promising career. The safer path is to internalise the expected line and repeat it like Pavlov’s dog.

Altogether now: ‘the violence was despicable’, ‘anarchist infiltrators’, ‘outside agitators’, ‘ruining it for the majority’… We even see this working with the unpaid careerists around the student press. In York, the student paper has even been identifying students who took part in the occupation of Millbank. The aspiring Pavlovian editors are no doubt eager to bolster their CVs with examples that they’ve learned the correct script. In a year or two, they’ll likely be on the dole queue with the rest of us, if they aren’t copying and pasting press releases for some local paper somewhere. But hey, maybe if they grass up enough students they’ll get a foot on the propaganda ladder, manufacturing consent.

The consent thus manufactured is what the Italian Marxist Antonio Gramsci called hegemony, where the ideas of the ruling class – the propertied - are accepted by the majority. Thus liberalism is the default ideology of capitalism. Pretty much all of us start off as liberals, and only change our ideas when certain facts hit us in the face. Sometimes those facts are batons.

Since liberal democracy rules by hegemony and not brute force alone, using too much repression undermines itself. While liberal regimes have historically turned into illiberal ones when faced with internal unrest (we need only think of the Weimar Republic), in general hegemonic rule is far more stable, easier to maintain and more conducive to capitalist economics than plain old tyranny. Thus the violence of liberal democratic states can be self-defeating. An example is the occupations here at Sussex uni earlier this year.

When students occupied management offices in Sussex House in March, management fabricated a hostage situation and called in riot police (clearly they knew perjury charges wouldn’t be brought against the defenders of property). The subsequent police violence hastened the end of the occupation, but created a massive backlash on campus. The next week, hundreds of students occupied the Arts A2 lecture theatre in direct defiance of a High Court injunction.

The first time, no major laws were broken and the police attacked with violence not seen on campus for some time (the videos are still on YouTube). The second time, over a thousand students and staff openly broke the law with impunity. No doubt the state had the violent capacity to evict the occupation. But it felt unable to use it for fear of losing legitimacy and weakening their hegemony.

So direct action like occupations or the Millbank riot opens up a counter-hegemonic space that not only challenges the state but exploits a chink in its armour. And few who take part in such actions are unchanged by the experience. Once you’ve broken a window or punched a cop, or even simply left the route of the sanctioned A-B march against the orders of cops or stewards, liberal democratic hegemony never quite has the same hold over you. Once you’ve read the newspapers take on events you experienced first hand, you can never quite take them at face value again.

"Direct Action is a notion of such clarity, of such self-evident transparency, that merely to speak the words defines and explains them. It means that the working class, in constant rebellion against the existing state of affairs, expects nothing from outside people, powers or forces, but rather creates its own conditions of struggle and looks to itself for its means of action." - Émile Pouget

Direct action is fundamentally opposed to the politics of representation. It means the dispossessed – i.e. those of us who don’t own enough property to make a living – taking action for themselves independently of, and invariably against those who claim to represent them. It can mean strikes, occupations, riots, blockades. It is strongest when it is done on a mass scale, involving people who’ve never taken such action before.

Representatives want to channel anger into safe outlets which don’t challenge existing power structures – of which they are a part. They oppose direct action so vehemently, so reflexively precisely because it renders them superfluous. If they had it their way, we’d all peacefully march through London, chant some slogans, then go home. A million marchers didn’t stop the war. The difference between representative politics and direct action is the difference between saying ‘Not in my name’ and ‘No fucking way’, between feeling like you’re doing something and fighting to win.

With the vicious, and yes, violent austerity programme, the stakes are simply too high for all of us to do anything else: the future they have written for us is call centres and SSRIs. The Millbank riot has to be just the beginning. It has to set the tone. In 1912, the Suffragette Emmeline Pankhurst wrote:

"There is something that governments care for more than human life, and that is the security of property, and so it is through property that we shall strike the enemy.... Those of you who can break windows—break them."

We need not necessarily break windows, but we will need to break some laws. In doing so, we’ll no doubt meet the uniformed violent minority of liberalism, defending the interests of the propertied, of capital, of austerity. No riot, no matter how spectacular will reverse the austerity programme alone. But widespread direct action in our campuses, towns and workplaces just might. In 2006, French students reversed the CPE law which attacked the rights of young workers after weeks of rolling direct action, including the use of economic blockades of strategic targets – train stations, department stores, major junctions... It can be done, and as friends new and old, lovers and strangers we can do it.

This article was published on 5 December 2010 by the SolFed group in Brighton. Other recent articles: