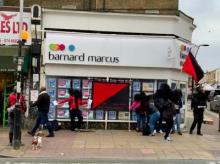 Here is another quick update about our ongoing public campaign in support of a group of tenants demanding compensation from Fox & Sons for having had their tenancy withdrawn 5 days after their move-in date [link 1; link 2; link 3]. 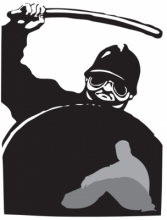 Recently, Richard Siggs, a Police Sergeant from Brighton, has been communicating with several charity agencies. In the text, he explains his concern about the “intolerable level” the numbers of “very visible members of the Street Community” have reached in the streets of Brighton, and he asks the agencies to reinforce these three ideas while dealing with their clients:

"Brighton & Hove do not accept rough sleeping to be a valid life choice, it is dangerous and based on chaotic life style"
"There is nowhere in Brighton & Hove to street drink, would you like us to refer you to support for your addiction?"
"Any property left laying around on the streets will be removed by the local authority and may be destroyed"

The latest official statistics show that on one night in 2011 there were 2,181 rough sleepers in England, up 413 from 1,768 on the same night the previous year. London and the South East had the highest number of rough sleepers with more than 400 in each region.

The news comes as mesures to criminalise squatting continue to progress through Parliament. The plans have been pushed by Hove MP Mike Weatherly. In Brighton & Hove last year there were 368 households classified as homeless, but 3,655 empty homes.

The Cabinet Office has reportedly been carrying out ‘war games’ to prepare for possible strike action against sweeping cut backs. Plans have centred on ensuring there’s enough scab labour available to break strikes in key sectors.

Ministers have already suggested they will tighten Britain’s already draconian anti-strike laws in the event significant strike action breaks out. A string of recent strike ballots have been ruled unlawful in the courts, using technicalities to annul majority votes for action. Both Prime Minister David Cameron and Chancellor George Osborne have threated to further tighten the law “as a last resort” if union bosses don’t co-operate.