A meeting of the Merseyside Blacklist Support Group took place last Saturday (February 23rd). The event was attended by numerous blacklisted construction workers and addressed by a panel of speakers including Steve Acheson, a blacklisted electrician from Manchester who has been picketing the Fiddler’s Ferry power station for the last 5 years to highlight the injustice inflicted on him.

Steve spoke about the collusion between trade union officials and construction companies that led to him and countless others being denied employment due to their trade union activities (often simply raising health and safety concerns on sites). Steve said he had only three terms of employment over a nine-year period and had been removed from all of them as a result of being blacklisted. 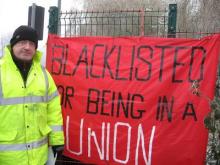 Blacklisted is a must-see short film about the victimisation of trade unionists in the UK construction industry and the workers fight for justice. Watch it (below) and spread the word.