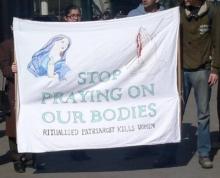 On Sunday 25th March members of the South London Solfed Gender working group, Femcells and others went to church. In response to 40daysforlife harassing women outside abortion clinics, we decided to harass one of their main proponents, Bishop Alan Hopes of Westminster cathedral. The basic message, in chant form, was “Bishop Hopes shame on you, come to us we’ll come to you!”. We won’t let the pro-lifers get away with harassment and intimidation.

We are feminists who have come together from a number of groups to organise an event on Saturday 14 February 2009. We are excited and energised by the current resurgence in feminist activism in the UK, but we think that the kind of feminist movement we build and the kind of politics it has, matter.

We are committed to an anti-capitalist feminism which sees the interconnections between all struggles against oppressions and against capitalism, and we want to build an event that creates an open space to discuss this and develop our ideas. But we don’t want to just talk about our politics – we want to fight to actually change the material conditions of women’s lives, to fight misogyny and our own exploitation, and to involve as many women and men as possible in the campaigns that will be at the centre of this event.