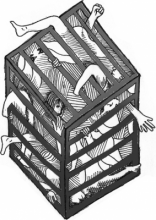 On 16th December 11 anarchists were detained in Barcelona, in what is known as “Operation Pandora”.

All 11 detainees are anarchist activists. 4 of them were released on December 18. One of them is a member of the CNT union from Sabadell and is still imprisoned.

His lawyer says they are being held because they are organised. They haven’t been accused of anything more than being active anarchists that spread and publish our ideas and fight for them.

It’s clear that this operation took place only to persecute and criminalise the libertarian movement and to in still fear in the rest of the population so they don’t fight against this system’s injustice.

We ask for solidarity. All that are able, please hold demonstrations or protest meetings to demand the detainees’ freedom and against Operation Pandora.

The ‘May Days’ in Barcelona 1937 was the turning point of the Spanish Civil War and Spanish Revolution, when counter-revolutionary forces moved against the anarchists, imposing greater control over the Spanish working class and reintroducing capitalist modes of production.

﻿Today (November 1st 2010) marks the 100th anniversary of our Spanish sister organisation, the ﻿﻿﻿﻿﻿﻿﻿Confederación Nacional del Trabajo (CNT-AIT). Liverpool Solidarity Federation extends revolutionary greetings to our comrades in the CNT-AIT and best wishes for the next century of struggle.

Read more on the CNT-AIT here.

The 22nd of April marked the end of the first month of an indefinite strike in Barcelona by workers at the Sant Sadorni d`Anoia logistics centre for the major Spanish Supermarket chain Mercadona.

The dispute began with the sacking of 3 members of the anarcho-syndicalist union CNT and the culmination of a campaign of threats by the company against workers unionising. Even before a strike was declared the company brought in scab workers, attempting to preempt the actions of their own employees. Immediately, the workforce went on strike, initially for 10 days, and has since developed into an indefinite strike.

The demands of the strikers are: