Workers in contract cleaning face low wages, a lack of basic employment rights, bullying management and victimisation for union activities. However, especially among Latin Americans, self-organisation has sustained struggles against the un-scrupulous multinational companies who employ them, and against the immigration controls which are used to sack un-wanted workers and victimise union acti-vists. Those struggles highlight the inadequacy of the “organising model” of trades unionism promoted by the likes of Unite! 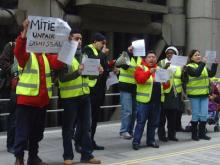 Latin American cleaners on Friday 3rd April held the latest in a series of weekly demonstrations outside their former workplace in the insurance firm Willis in the City of London against the sacking of five of their colleagues by the Mitie cleaning contractor. The four men and one woman were dismissed following an email conversation with management, in which the cleaners registered their unhappiness at a sudden change in shift patterns, done without consultation.