At least 15 weeks before the child is expected (the qualifying week), a pregnant worker must tell her employer that she is pregnant, when the baby is due and when she intends to start her maternity leave. This can be changed, for example if the baby comes early. The employer must reply in writing setting out her expected date of return. If they don’t, she cannot be prevented from returning early and is protected from losing out if she returns later.

All pregnant workers are entitled to paid time off to attend ante-natal care. A woman is entitled to statutory maternity pay (SMP) if she has: 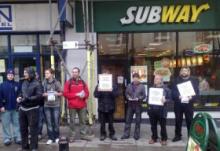