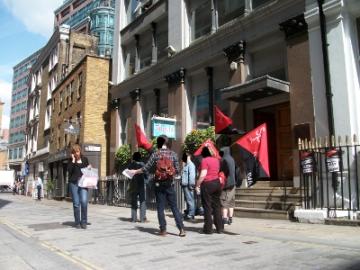 Solidarity Federation has recently been leading a campaign in support of Dan, a former temporary worker employed by the Office Angels recruitment agency over unpaid wages. The past week has seen a national week of action against the agency, and response has been phenomenal, with pickets of branches across the country. This was to be followed by an international week of action, against both the company, and parent company Adecco, with a large number of pickets planned across the world. Whilst on the pickets yesterday we were informed by Office Angels that they had given in and paid Dan all the wages he was owed. We've now had this confirmed by Dan himself so would like to thank everyone who supported this struggle. We are asking that all protests be brought to an end, until the next time workers find themselves in this situation. In the words of Dan, "a massive thank you to London Solidarity Federation particularly, and everyone else who picketed, emailed and rung. Was actually touched by everyone's support."

On Wednesday Office Angels were forced to issue a public statement claiming they "did not receive approved timesheets" from Dan, but as he points out, this was because the Wimbledon branch had assured him that this would "not be a problem". We wonder whether this could be the reason for the recent change of manager in that branch? They also said "the client concerned has not confirmed that he attended for work". Dan had been caught between a recruitment agency that wasn't following procedures and a business that is struggling to survive in the current financial climate. This is increasingly becoming the norm for such workers, with both parties attempting to absolve themselves of responsibility in order to shield themselves.

Yesterday this statement was changed to claim that "new information has recently come to light and we have taken this individual at his word and paid all monies outstanding". This was Dan refusing to accept anything less than full payment for the work he had done with no conditions and the support of workers across Britain and the world. By controlling our own struggles, using direct action to fight for our rights and improved conditions, and international solidarity, we are able to build the foundations for a better world. In an era of global austerity and increased attacks on the working class this becomes even more vital. While those in power attempt to force the costs of austerity onto the working class, the only recourse left to us is to assert ourselves and directly block these attacks on our living standards.

Office Angels admitted that "many people find themselves in a position where they need to consider temporary work as a result of job loss or redundancy" leading to "in excess of one million temporary workers in the UK". The kind of practices displayed by Office Angels are sadly widespread and with the economy struggling many more workers are likely to have similar experiences. To end this we need to stand together and resist. We still want to hear from any workers taking direct action that would like our solidarity. While this campaign has been a victory, while we labour under a system that forces all of us to work and suffer for the benefit of the rich and powerful, our struggles must continue.