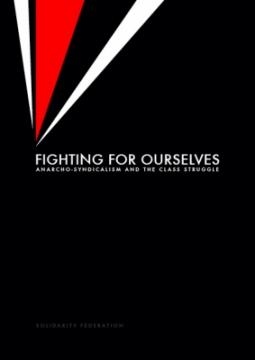 We are living in times of unprecedented attacks on our living conditions on all fronts, of rising social tension and sometimes violent eruptions of class conflict. And yet if anything, the surprise is not that there have been riots and the odd strike, but that there have been so few. How are we to make sense of this? How are we to fight back, to take the initiative? Against capitalism, what do we want to put in its place? The 20th century discredited state socialism, and rightly so. But with it, a whole history of international class struggle, of revolutions and counter-revolutions, victories and defeats, spontaneous uprisings and vast workers’ organisation has been eclipsed too. This pamphlet aims to recover some of that lost history, in order to set out a revolutionary strategy for the present conditions.

Fighting for ourselves will be released as a hard copy in October 2012, as well as online soon after. Copies will be available from the Solidarity Federation stall at the London Anarchist Bookfair on Saturday October 27th. Initially it will only be available in English, but we are looking into translations if there is international interest. International distribution arrangements are to be confirmed.