According to the Independent, Aaron Porter, NUS president is reported  to have said "Despite repeated dismissals by Nick Clegg that these are uninformed protesters, students are intelligent, articulate people who are not being listened to by those in whom they placed their hope for a different politics."

What the students... should learn is that if they really want a new politics, they need to look further than voting Lib Dem, a party which, unsurprisingly, has demonstrated that it is, when all is said and done, just more of the same old.

The need to look to a truly new politics: not the capitalist joke of a 'democratic' system we live under now.

Plans to cut 50,000 jobs are being discussed. Not only will this mean 50,000 people with no jobs, it will also most certainly hit front line services: the council says that only 4% of it's budget goes on back office services.

"When the county council faced its last major round of cuts and changes to services in 2006, hundreds of people took to the streets of Northampton to oppose the changes and the chief executive said he would not rule out such scenes being repeated when this year’s budget is announced next month."

The budget will be announced on 14th December.

Info from this Chronicle and Echo article.

On Monday 29th November a meeting has been arranged by the Socialist Party and the Green Party to discuss the cuts.  People of an anarchist persuasion might wish to attend...

We join the fight against the cuts now because they will bring immediate and real hardship and suffering to working people.

But the answer does not really lie in a readjustment of the government's budget.

The real answer lies in a fundamental change in the way we organise our society and economy.

The fight over cuts is symptomatic of the fight between the wealthy, the capitalists, and the workers.

It concerns how the wealth generated in society is distributed: but a slight shift one way or the other is not enough. 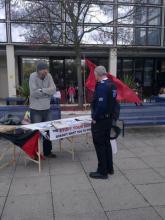 Members of Northampton Solfed set up a stall outside the MK shopping centre today with the aim of handing out 'Stuff Your Boss' and Catalyst, as well as a talking to passers by.

Within just 5 minutes of setting up the shopping centre security turned up to inform us that we were not allowed to be in this open and public space as it was, apparently, Private Property.  Eventually, we attracted the attention of two security guards, the centre manager and a Police Community Support Officer and were facing threats of having the police called to move us on.

Despite this attention, information was handed out to many, and conversations were had.

And it only rained on us briefly! 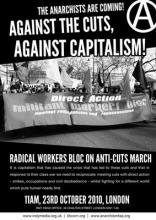 As the anti-war movement has shown, protest alone won't change anything. The government have already said that they will not be swayed by protests. Instead, we need a widespread fightback based in the workplace as well as the streets that acts in solidarity with fellow workers fighting these austerity measures all over the world.

You can get in touch with us via the contact form on this site.