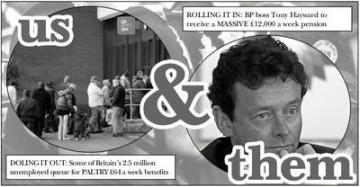 The Government’s “tough but fair” budget will hit the poorest the hardest, as well as having a disproportionate impact on women, two reports have found.

The Institute for Fiscal Studies (IFS) describes the budget as signalling the “longest, deepest, sustained period of cuts to public services spending at least since WWII”. Chancellor George Osborne claims austerity is “unavoidable” in order to reduce Britain’s deficit, and business leaders have sounded their approval for the plans. However, trade unions warned of hundreds of thousands of job losses, accusing the government of “declaring war on public services”.

Meanwhile, the Sunday Times Richlist reveals that the richest 1,000 people in Britain added 30% to their wealth despite the recession. Now a new report has rubbished the claim that the budget is “fair”. ‘Don’t forget the spending cuts’, commissioned by the Trade Union Congress and the public sector union Unison, looked at the impact of the budget on different income groups. Because for example, richer people can afford private alternatives they are less reliant on public services. Likewise, the less well off people are, the more likely they are to be receiving benefits. The report modelled this and found that cuts to public services and welfare are likely to disproportionately impact the less well off.

This finding was echoed by IFS director Robert Chote, who explained the cuts “are likely to hit poorer households significantly harder than richer households”. Particularly he cited the decision to link benefits payments to the Consumer Prices Index (CPI) rather than the Retail Prices Index (RPI). CPI is typically lower than RPI (which includes housing costs), which means the cuts will become cumulatively worse in real terms for benefits recipients, as prices rise faster than their benefits payments.

Separately, the Fawcett Society has launched a legal challenge to the budget, describing it as “blatantly unfair”. They claim that of £8bn cuts, £5.8bn will affect women, and are seeking a judicial review in the High Court, claiming the government failed to carry out an equality assessment when deciding the austerity measures. Fawcett Society solicitor Samantha Mangwana stated that “George Osborne expects women to pay three times more than men to accelerate deficit cuts, even though women still earn and own far less.”

The headline measures in the budget is an unprecedented £113bn cut budget squeeze by 2014-15. This will involve 25% cuts to virtually all government departments (with some protection for the NHS and International Development), £8bn from net tax rises (mostly from VAT increasing to 20%)and £11bn in welfare cuts (see our special feature on the left of this page). On a closer look, it becomes clear just how regressive these measures are. While corporate taxes have been reduced, VAT – a regressive tax – has been increased. As already noted, benefits and public service cuts also disproportionately impact the less well off. Effectively this is a budget to punish ordinary workers for an economic crisis we were not responsible for.

Major banks have already returned to profit. Northern Rock, RBS and Lloyds banking group, all saved by state bailouts, announced they had returned to profit in July 2010. HSBC also recently announced its profits had doubled to £7bn for the first 6 months of 2010. The return of 6-figure bankers bonuses has also been widely reported. Elsewhere in the corporate world, the recession is also already a thing of the past. BP Chief Executive Tony Haywood will collect a massive £600,000-a-year pension when he retires in October, despite taking much criticism for his role in the Gulf of Mexico oil spill.

So are the austerity measures really “unavoidable”? That depends on your point of view. For the politicians, bankers and business leaders, absolutely. The £850bn bank bailout that prevented the financial crisis turning into an all-out capitalist collapse dwarfs the savings from austerity. But having staved off collapse, the masters of the economy find themselves between a rock and a hard place, and as ever their solution is to give us a good squeeze in their place.

Their dilemma is this: cut too much, and consumer spending will inevitably fall, raising fears of a ‘double-dip’ recession. A double-dip recession would be bad for the economy and bad for corporate profits, and would probably lead to yet more cuts to public services, jobs, wages and benefits. But cut too little, and the cost of the recession will be borne by businesses and the rich. That too is bad news for them, for obvious reasons. Essentially they are gambling that they can cut our incomes without much knock-on effect on our spending.

If that doesn’t make much sense, that’s because it really is a gamble. The ‘boom’ was sustained by cheap credit. Wages failed to keep up with rising prices, but the combination of rising house prices and easy credit meant consumer spending could grow and grow. But it was always a bubble, one that burst spectacularly when the sub-prime mortgage crisis in the US sent shockwaves around the world’s financial system. Collapse was only averted by massive bailouts. So a repeat of that strategy so soon after its disastrous effects is unlikely. What options that leaves is unclear.

What is clear is that capitalism has always been a crisis-prone system since its very beginnings - runs on the bank are not a new thing - and that the solution to every crisis has been to squeeze the working class until profits can be restored at an acceptable rate. In response, we can only say that we’re not all in this together. During the ‘boom’, there were no politicians, bankers and business leaders lining up to insist we all share the wealth, and in the bust we should reciprocate. Their system, their problem.

The only way to impose our needs is to stand up for ourselves – widespread strike action will make them think twice about the cuts, and in the face of industrial action they may well decide to shoulder more of the costs of the crisis. Certainly if we let them get their way, we will be paying for it for years to come, while their profits, bonuses and pensions have already returned to multi-million pound levels.