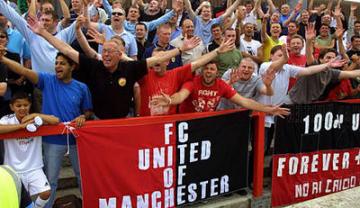 One evening in May 2005 at a curry house in Manchester a group of disillusioned Manchester United fans decide they’d had enough. Billionaire Malcolm Glazer’s takeover of the club was the final straw in a long line of events, including changing kick off times for the benefit of television and ridiculously priced tickets. They decided to do the unthinkable; form their own football club.

Fast forward to Bonfire Night 2010 and that club, FC United of Manchester (FCUM) beat Rochdale in the first round of the FA Cup. Over 3,500 FC fans celebrated this achievement of a club that set out to do things in a radically different way.

Owned by its fans, FCUM is based on seven core principles including the board being democratically elected by members, decisions taken on a one member, one vote basis, a commitment to avoid outright commercialism and remaining a non-profit organisation.  Two slogans of the club are “Making friends not millionaires” and “punk football”:  its radical outlook has secured links with others including the infamous Hamburg club FC St Pauli.

Last year FCUM and the Working Class Movement Library commissioned the Outcasts exhibition to commemorate the centenary of the 1909 strike by players from Manchester United who refused to relinquish their membership of the players union and were called “Outcasts FC”. For a club so aware of its roots and history, it was no surprise to find that the day after the biggest night in their short history the club declined to appear on the BBC’s Football Focus in solidarity with a strike by the National Union of Journalists members at the BBC.  Although strike-breaking BBC staff told FCUM officials that the dispute only involved newsroom journalists and didn’t cover sport,  this subterfuge was quickly discovered by the club.  Subsequently, Football Focus carried a brief report from Old Trafford about FCUM’s victory without interviews from players, board and supporters, but the location of the programme, provided a stark, and ironic, contrast to the principles of FCUM.