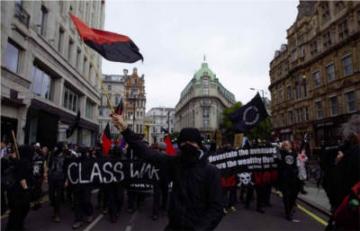 The last anti-cuts movement was dead by 2012. While some campaigns kept going thanks to brave and dedicated people – the waves of university occupations, the riotous school kids taking to the streets, and the mass militant protests were definitely at an end. Each protest seemed to get less and less people. The hoped-for general strike and big union battle never happened. But what I also remember at the time was the feeling in the air. Standing in the courtyard of Millbank and watching police retreat from angry students had felt euphoric – afterwards there was sense in lots of people around me that Something was happening, that anything was possible. By 2012 this had not only gone – but been replaced by a cynicism even worse than before. “I’m not going to the protest, nothing’s going to happen”, “There’s no point, no-one will come” were both things I heard a lot. Now this has changed.

I don’t hear this sense of despair anymore (at least outside of the activist scene!) This isn’t just a feeling – concrete things have happened since the last election. Something woke up in us that meant in the weeks following the Tories’ return to power, there were local demonstrations across the country that were far bigger than anything in the years before. And more recently there is the election of Jeremy Corbyn as leader of the Labour party. This doesn’t change all that much in itself – but it does show that lots people are angry at the cuts and believe in an alternative. This is just the beginning. A-B marches and electing left-wing leaders is one thing, but there are three factors that I think will push people to do far more. That is – the student movement, the trade union bill, and housing struggle. People are being squeezed and lots of us are angry as it is – but these three things could get people organised and cause the anger to boil over into action. I’ll explain why each one has potential, then discuss how anarchists can make the most of it.

Let’s start with the student movement. When it kicked off in 2010, it wasn’t obvious from the outside that things were about to happen. Every other anti-fees struggle had been pretty weak after all. But low level radical struggles had been growing in universities for some time. For example, the occupation against closing the Philosophy department in Middlesex in May of that year. And in the year before that, there were a series of occupations in support of Gaza. There have been similar events over the past couple years – occupations and militant protests that could inspire the next wave of mass student struggle. And now the National Campaign Against Fees and Cuts has announced plans to organise a student strike in 2016. Surprisingly, even the executive committee of the of the National Union of Students has declared support for a strike ballot. The student movement is getting ready for a proper fight for free education. If they pull it off then this strike could mobilise huge numbers of people, and encourage the wider anti-austerity movement to start putting up a serious fight too.

Next on the list is the Trade Union Bill. Going through parliament at the moment, this bill will severely limit trade unions and the legal right to strike. This has got the bureaucrats worried as well as rank and file members. The “leaders” of trade unions have traditionally held back their members during times of struggle – condemning “unofficial” strikes, pushing people to negotiate instead of fight, and even undermining their own campaigns. [1] Now at a time when the rank and file will be thinking about wildcat action against the bill, their “leaders” have no motive to hold them back. They are loosing some of their power and the only way for them to get it back, is to give rank-and-file workers a free hand to take militant action, demonstrating to the ruling class why the bureaucrats were needed in the first place. Unite has already declared it won’t automatically oppose “illegal” strikes. Similar forces are behind the election of Corbyn as leader of the Labour Party – union members were encouraged to sign up and vote for him. This wasn’t because those at the top supported his policies, but because they were angry at loosing influence in the party. They needed to show that having individuals vote for a leader, instead of giving unions a block vote, actually pushed the party FURTHER to the left. So with this bill, the Tories have created a complex situation where anything could happen. While it’s not clear exactly where this will lead, the fact that they’re leaving many people with no choice BUT to take illegal action has to go somewhere!

Finally, there’s a growing movement around housing – against evictions, against gentrification, for more social housing and cheaper rents. This is especially strong in London – which is no surprise as it’s the worst hit. Recently we’ve seen the rise of the E15 mothers, the Sweets Way eviction resistance, and let’s not forget the unexpected riot at Class War’s “fuck parade” this September. What is important here isn’t just that our housing situation is getting worse (that’s been going on for a while), or that people are angry about it. What’s important is that people are are angry AND getting organised. For all the talk I’ve heard in social centres and anarchist events about “gentrification”, the Fuck Parade riot is the first thing I’ve seen in this country that actually managed to get people on the streets doing something about it. Many of the anti-eviction, pro-social-housing campaigns have shown that they are willing to network and support each other, as well as taking direct action. If they carry on as they are, this could really grow into something big!

There are other struggles that have potential too. For example against cuts to healthcare – there have been successful local campaigns against privatisation, and there’s a possible strike of junior doctors coming up. But the three above are the most visible.

So, it’s likely that some kind of anti-austerity movement is going to kick off in the next year, maybe even in the next few months. How far it will go and what we will win is still to be decided. What will make the difference is the tactics that we use. Rank and file workers, along with grassroots community groups, need to lead the way for us to get anywhere. These groups need to use tactics that force the hand of the rich, rather than just doing slightly militant lobbying. Making the case for grassroots organising and militant action is something anarchists can contribute to the anti-cuts movement. The other thing missing, which anarchists have, is a clear alternative – an idea of what we want instead of privatisation and cuts. The “social democracy” of the Left wing of the Labour Party is not a believable alternative to the Tories “neoliberalism”. Even before the cuts – benefits were too low, the NHS wasn’t good enough, and work was still shit. The UK has never been a happy socialist utopia – even with the old NHS and more social housing. [2] Up until now too many anti-austerity speeches have been about returning to a world that never really existed in the first place! If people know they can’t really win, they won’t put their heart and soul into struggle.

When it kicks off, we need to be on the front lines organising and fighting. In the mean time, anarchists and their organisations need to prepare. This starts with putting out a clear strategy – saying how the cuts can be fought and how this is part of a wider battle against the rich. [3] This will give us something to argue for and rally behind. Once that’s done, our job is simple – join the struggles in our communities and workplaces that have the most potential, and argue for anarchist methods. Where real rank-and-file groups are formed, get them talking to each other and working together.

We have a rocky road ahead. Our class will be in constant danger of getting sidetracked from the best course – grassroots organising and direct action. The Labour Party will try to get people to lie down and vote, whereas the vanguardists behind the people’s assembly and other fronts will try to get us bogged down in bureaucracy and bound to their (bad) leadership. But if a few of us can organise effectively then there’s a chance many more will see and join in – and then we really will be in with a chance of beating the cuts.

[1] – See Chapter 1 of Fighting for Ourselves for some of the problems with mainstream Trade Unions – http://www.selfed.org.uk/read/ffo
[2] – For example, see the pamphlet “How Labour Governed” - https://wessexsolidarity.files.wordpress.com/2015/08/45-51.pdf
[3] – A good example of this was AFed’s poster “everything we’ve won, they want it back”, which was published in March 2011 and put across why anarchists oppose the cuts and how to fight them effectively. It may not have been the easiest thing to distribute (half-poster-half-leaflet), but the text was really good – http://afed.org.uk/everything-weve-won-they-want-it-back-march-2011

This article was published on 1 November 2015 by the SolFed group in Bristol. Other recent articles: