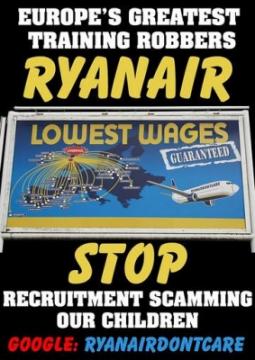 Ryanair's current policy of “recruitment-for-termination” is part of the massive exploitation of young people who apply to work for the company. As it stands potential cabin crew have to pay a fee of 3000 euro through an agency to undergo training for Ryanair.  As many as 60 are sacked at any one time after this initial training period with up to 200 people a month losing their job. All those sacked lose the money they have paid out for training. There are 11 Ryanair cabin crew training courses already underway, to end at the end of March which gives you some idea of the amount of money Ryanair is making out of the “recruit-for-termination” scam.

Ryanair target young people who are then based away from home to make it easier to pressurise and exploit. The day before being sacked a Ryanair supervisor tried to persuade John’s daughter, Sarah, to resign.  If she had resigned the company would have charged her 200 euro the standard amount charged to all those staff  who resign. After being sacked she requested a flight home but was told by the company that she was not eligible for a flight as she was no longer a employee of Ryanair. With no money to get to her home to Liverpool her parents had to travel to Dublin to collect her.

Those who survive the initial training period are put on a 12-month probationary period  on a lower rate of pay than normal cabin crew and Ryanair pocket the difference-as much as £20 million per year. Pay in the first year can be as low as 520 Euro after stoppages, such as the 25 Euro charged for the uniform, are deducted.

Working conditions are no better, workers are expected to work  2 standby duties each week, one a Home Standby,  lasting 11 hours  for no pay and an 8 hour Airport  Standby, for which 30 Euro is paid, working out at 3 Euro an hour after tax.  Workers are also only paid for the time they are in the air. As one Ryanair worker noted:

The Ryanair Don’t Care campaign is getting increasing media attention in the British media after a number of high profile protests by John Foley, the latest of which was to handcuff himself to the goalpost during a football match being screened live on national TV. Help keep the pressure on Ryanair by supporting the week of protest.

-Support the call-out for an International Week of Action against Ryanair, on the 12-18 March
-Hold pickets of airports where Ryanair put on flights, offices of Ryanair and agencies / recruitment fairs through which they hire staff
-Picket the Cheltenham Festival, which Ryanair sponsors, and particularly the Ryanair Chase on Thursday 15 March
-Phone, fax and email Ryanair to complain about exploitative recruitment practices

Below are the easiest ways to contact Ryanair to complain

See this page for letter templates and further Ryanair contact addresses, and here for leaflets and placards.